The ‘fly on the wall’ documentary “Lagos To London” broadcast on Channel 4, June 7th 2016 at 10pm, following the lives of a group of some of Nigeria’s super rich elites living between Lagos and London.

It’s pretty much every publicist dream to see their client get featured on a major primetime slot on television, particularly if the client is backed with credibility and an attractive brand presence. The opportunities for further press and media opportunities can be endless not to mention the social media impact. The participants of the documentary may or may not be represented by a PR agency at the time of broadcasting but by the end of it they probably needed one because whilst it was entertaining there were more than a few problematic segments.

I watched with my usual enthusiasm, it looked like the type of reality TV show  that I’d watch just to hate, and the only way really to truly illustrate my reaction was through my favourite social media platform, twitter. Some of the tweets on my timeline deserved their own TV show to be honest because they were what really made the show fun. Here are just some of the timeline observations which helped to either boost or possibly damage the media profile of some of the participants involved in Lagos To London. 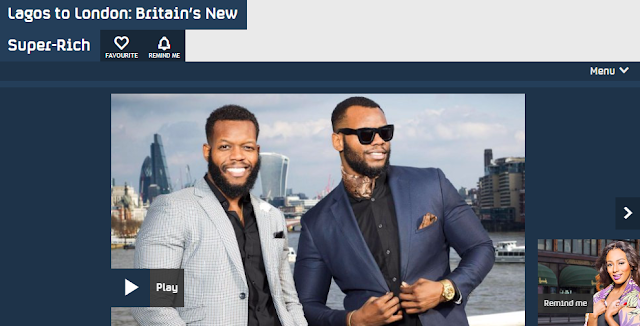 The show touched on the social context and some of  the realities of life in Nigeria for the general public for a brief moment, one of the participants mentioned poverty I think so their socially responsible statement may have given a good impression or led viewers to believe that they were “woke”…

People will watch #LagosToLondon then go and look at the economic situation in Nigeria and just be like… pic.twitter.com/Dzqh0botnC

There was the obligatory back to the “streets” scene which was interesting, not sure if it was necessary but it made the millionaire featured seem to be more relatable. In my eyes it came across as condescending but people loves a “rags to riches” story so….

If I lived on a council estate & anyone ever dared come to my yard with a camera crew but no cheque!#LagosToLondon pic.twitter.com/3zW8YiRiYA

The show made the relationship status of the young millionaires, specifically the twins, elusive which is a great media tactic  as it gave the timeline lots to react to and it worked! The social media attention for some of the participants went through the roof.

The next time I cry over a boy it’s going to be one of these guys. I’m not crying over council flat boys again.

The show really worked on wealth aspiration and the capitalist rewards of nice things, pretty, shiny and fancy things regardless of how wealth is attained. Although I had to draw the line at the spinning diamond ring and excessive dry cleaning bill for a suit, some of us looked at the participants in awe and confusion. I mean who refers to Harrods as their local shop? The participants were out of touch with most “average” people and there was no interrogation into the impact of what most of these individuals actually do, we just see how they spend their money rather than looking at the truth of Nigeria and its diaspora.

calling my dad tomorrow, if 2say him don thief when him get chance I go dey this #LagosToLondon instead of watching it.

Why am I watching this?
It’s only 5 minutes in and already I’m like…#LagosToLondon pic.twitter.com/RKXG2uxQTJ

Jokes aside don’t start comparing yourself to these people I beg!
Most of them were born into money.
Don’t crack your head! #LagosToLondon

It was a fun show to watch for online interaction, perfectly made for the type of public reaction that my timeline represented. But it was not in any way trying to be a socio-economic political expose into the lives of the Nigerian diaspora, it was intended as an over the top insight into the lives that some people genuinely aspire to live. It went viral, boosted some personal brands and it made some of us laugh so it fulfilled its purpose. Also shows how much of a desire there is to see the African and Caribbean diaspora on our screens, the show wasn’t widely advertised and yet I’m pretty sure it was trending within a few minutes of starting. It was sensationalist TV, tacky and tabloid which should be watched with a pinch of salt but is a reminder that whilst representation is important and can be entertaining it is not always educational.