When Journalist Gasper Ramirez approached me to comment on his piece on “Brand Africa”, inspired by #TheAfricaTheMediaNeverShowsYou hashtag, I jumped at the chance. I had so much to say and the opportunity to say it in one of Chile’s most popular publications made it all the more worthwhile. I used to be able to speak Spanish and now I wish I had kept practising but I can still read and understand most of it so I am happy with how this article has been presented.

We need to spread the message that “Africa Is Not A Country” across the world, nation by nation we can make a difference to show the world how amazing the continent can be if given the opportunity to truly thrive. 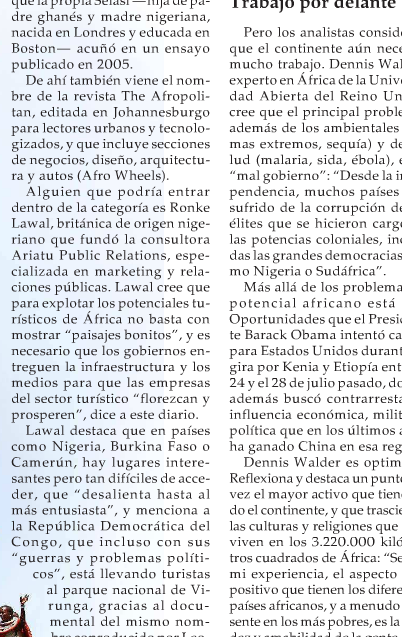 There are so many countries which have the potential to break the mould when it comes to how the media sees the continent. Governments have a responsibility to provide the infrastructure and environment to allow businesses in the tourism sector to flourish and thrive. There are so many beautiful regions, beaches, sights that are just too difficult to get to! Friends tell me about their experiences of travelling across countries like Nigeria, Burkino Faso, Cameroon, for example, and the length of time it takes to get to a place and the quality of the journey itself is enough to make someone NOT want to go anywhere. There is not a single African country that is not worth visiting, even land-locked DRC with its wars and political problems has vast regions of beauty which tourists flock to, just visit https://virunga.org/ a national park which has gained interest with the help of a film co-produced by Leonardo DiCaprio (an international film star!). The film in itself was fantastic PR for the park, not great PR for the government of Congo but again this reflects a serious issue of how governments and institutions go beyond rhetoric and panel events and start doing things to uplift their nations and take over the narrative.  A great example is Kenya, when CNN referred to the nation as a “hotbed of terrorism” since then The Kenya Tourist board has withdrawn adverts from CNN and CNN has had to apologise. Kenya values it’s public image as a nation and a tourist destination and ministers took it seriously. Kenya is a great example of a nation that has taken this #TheAfricaTheMediaNeverShowsYou hashtag seriously. Many more African governments should be doing more, investing in hospitality training, transport links, infrastructural development and public relations on a wider scale. If they leave it to Western Media then the narrative of the continent will continue to be that it is filled with lands of “safaris and wildlife” or “wars, famine and poverty” when Africa has so much more to offer.